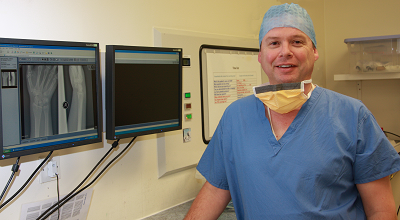 David Standley, having already trained as a general orthopaedic surgeon, chose to specialise exclusively in the diagnosis and treatment of problems in the hand. His entire elective practice, both private and NHS, is now concentrated on this complex area.

Mr Standley qualified from The London Hospital Medical School in 1990. He had previously joined the Royal Army Medical Corp during University and served his years prior to surgical training as Medical Officer to the Royal Artillery. In 1993 he started his Basic Surgical Training; working in Germany and the UK prior to his first Fellowship of the Royal College of Surgeons in 1996. Having become a Fellow he moved to the Southwest of England where he has largely lived since.

His formative years training in orthopaedic surgery allowed him to become geographically familiar with the region as he moved gaining experience. In 2000 he passed his Fellowship examination in Trauma and Orthopaedics and then, having completed his general orthopaedic training, he chose to focus his remaining training years on hand surgery. To that end he was privileged to be awarded Fellowships at 2 of the worlds leading Departments of Hand Surgery; The Department of Hand and Micro-surgery, North Shore Hospital, Sydney; and The Hand and Upper Limb Unit, Wrightington Hospital, Lancashire.

In 2002 he completed his training and was honoured to be entered onto the Specialist Register of the General Medical Council. For 2 years he held a consultant appointment in Derriford Hospital, Plymouth and later was able to move, settling at the prestigious Princess Elizabeth Orthopaedic Centre, Exeter.

Having recently retired from the Armed Forces in the rank of Colonel; where he treated the hand and wrist problems in servicemen from around the country: enjoying the added challenge of treating patients with such high physical demands. His military practice has always complimented his interest in Sports injuries, having treated everyone from Sunday amateur to international sportsmen, from a variety of sports. Academically he has enjoyed teaching the next generation of surgeons, both locally and nationally, and has been published on both hand-surgery and military subjects; winning awards in both.

This site uses essential cookies to improve the performance and enhance your user experience. By continuing to the site you are agreeing to the use of cookies